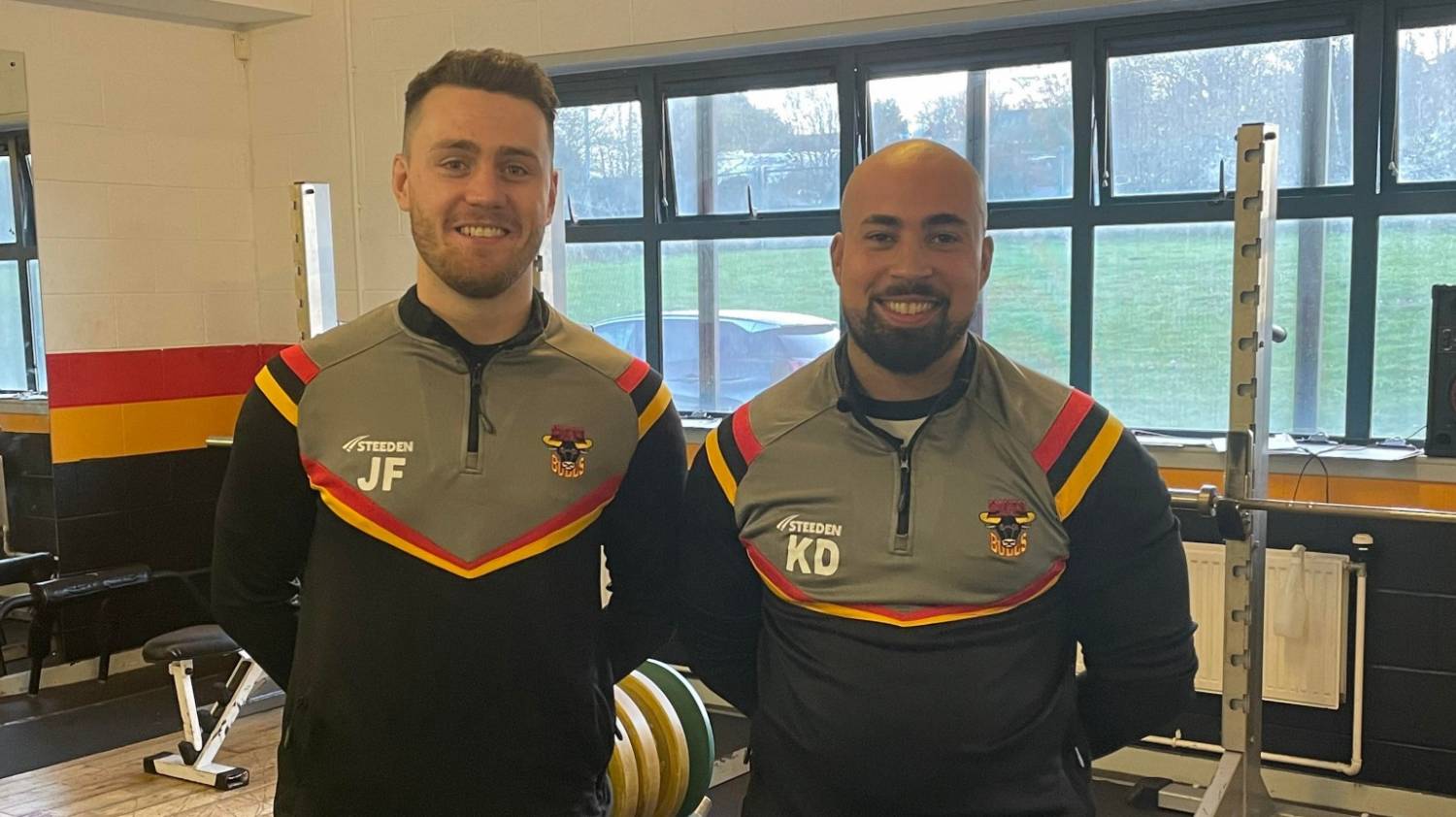 As we get stuck into our 2022 Pre-Season training, we are delighted to unveil our new Strength and Conditioning team!

Kane Daniels comes on board as Head of Strength and Conditioning and brings a wealth of experience through roles with England Youth, Huddersfield Giants and Hull Kingston Rovers.

Joel Fulford will work alongside Kane within our S & C department having spent six years at Wakefield Trinity.

Bradford boss John Kear has spoken of his delight at the duo's arrival - hailing their attention to detail as 'first class'.

“I am absolutely delighted with recruitment of Kane and Joel, their attention to detail and planning has been first class,” said Kear, who is sponsored by Bradford Bulls Banter.

“We have been through to the nth degree what we want to achieve in off season for conditioning and the players are buying into it.

“It is certainly very tough and difficult but if they do it correctly their bodies will adapt and we will see a very fit and able team take to the field in week 1.

“What we did in our own review was look at where we conceded tries, how and what quarter of the game and we identified some areas of weaknesses.

“Part of that is to build up our resilience, second efforts and ability to be comfortable when we are uncomfortable.

“If you are defending a second set on your own line it is uncomfortable but we need to be comfortable and able to do that physically and a third set too and if we do that I am certain we have structures and systems to be a very resilient and very tough team for this coming year.”

"The boys have had a bit of time off recently, they came in in small groups for testing which helped me build some relationships, we did a battery of tests and we have now started for real, I am looking forward to it and I hope they are as well.

"Mine and Joe's relationship is new, we have built the plan what they will do for speed, conditioning and weights and we have been updating the gym with some new equipment so it is ready for the boys.

At this time of the year we are looking at the underpinning of physical performance, we are trying to build the base of the pyramid so to speak so the peak can be as high as possible.

"We will climb higher and higher, right now aerobic fitness general strength base and build week on week like that.

"Pre-season is vital, from my point of view it is huge but we know as practitioners lads that complete pre seasons are available longer throughout the year so it is about building robustness for the season to come."

"Kane has taken the lead of strength and the gym, when John spoke to me it was about speed and power but I think getting to know Kane our skill sets blend really well.

"It is going to be short and sweet, they have been doing programmes at home it will be intense from the off, 5 weeks until our first trial game a big remit John has given us is repeatability and be in there or thereabouts in the last 10/15 minutes of each half that is a big focus for us.

"I just want to see a really strong focus in their application, it is a good squad with some senior faces and some younger lads coming in, it is a big squad so we want to see a high level of accountability and high intensity efforts.

"I am massively looking forward to the challenge, John sold his vision for Bradford on me and the opportunity to learn off someone like Kane who is a few years further down the line in terms of development and to offer what I can do for the next 4/5 weeks here at Bradford."